I have said as long as I can remember that we are born strong or we are born weak. I was just lucky enough to be born strong, and that has allowed me to navigate this life I was given. Most of the good that has happened to me has been pure luck, just luck. I take no credit in how I have gotten through all that I have as most of what I did when I was younger was as stupid and reckless as many others. I take no credit in how my body has withstood so much and has allowed me to be here.

What I do know is that people such as myself, or at least many of them, have insights others do not. I think of the other people as the “what shall I wear today” group. Those whos biggest concern is what to wear every day, or what their weekend plans are going to be. I find that these humans have no way to relate to me. After all I am a reminder of what scares them. I used to think that being strong meant you had to fight for and about everything, to stand up and stand for. It was the thoughts of someone who has been forced to do that, so I guess it made sense at one time. These days I have no desire or energy to fight about anything. Perhaps I am numb with all that has happened, or perhaps age has given me some grace along with the peace I have come to find.

What I do know is that with chronic and serious health issues comes a sense of understanding of what life should be about, what life IS about. The understanding that everything matters, but nothing really is as important as you think it is. The knowledge that life is amazing even on the worst of days, and the feeling of gratitude for the good and bad. The sense that time really does go quickly so make everything count. To remember that we are solely responsible for our thoughts and actions and can find our way through anything.

What it also brings for many of us, especially after so many years, is inability to deal with shallowness, laziness, ignorance and more. Therefore it can be a challenge to walk the line between being social and wanting to be alone.

Although you would never know if you were to meet me or hang out with me on most days, I deal with multiple issues resulting being born with a common birth defect and resulting in a kidney transplant in 1999.

That is one line from a short paragraph about my health noted in my online dating profile. Why do I bother to make note of my health? Well, I have nothing to hide and am an open and honest person, and it  is a part of who I am. And I have unfortunately learned since being single the last few years that it saves time because anyone who is shallow and not able to deal with things will not even bother to contact me. Ultimately it is probably to protect me and this ability took me a long time to develop. It has been an exhausting and depressing journey through the dating world. I am already the type of person who is very particular about who I talk to, never mind who I would even agree to meet. On top of that I have to, every time I meet someone who I think may be worth my time, figure a way to tell them about my infections and how that will impact what is most important to them…sex. These days I also now have to deal with the multitude of other issues issues which make many days suck, and that I don’t  often have the energy to go out after work and have fun like many other people do.

The stress of worrying about letting someone down and not being all that I could be, as I should be, has become a lot to deal with.
But, it was not always like this.
When I was sick in my 20’s I still had no real sense of ultimate death. I was dealing with a lot and struggled with chronic issues, but the urgency of a limited amount of time was not there, even when I only had weeks to live before my transplant. It is amazing what young minds allow us to cope with, whether it be strength or stupidity, who’s to say.

I remember living in Philadelphia and working at my first veterinary hospital, a job which meant the world to me. I remember leaving work one day and as I walked down the street to wait for the bus to New Jersey, I could only think of how I was going to get through the transplant and all that went along with it. I remember that instead of wearing my scrubs, I was wearing a skirt again that day because I had a catheter strapped to my leg which had been there for at least a week. I had it as a last resort attempt to try to fix things, but it did not work. I remember exactly where I stood on that sidewalk, the sounds of the traffic, the thoughts running through my head. I know I had a sense of dread and uncertainty, but there was never a moment that I did not think of the next step...after the transplant. There was an after, there was more time.

This memory is from a few years after another of a hospital bed, but not in a hospital. It was when I was in college and living with a guy. He was not an overly happy person to begin with, and my unpredictable health really made him even more miserable and scared. And it seems that an episode of internal bleeding was enough to send him over the edge, and away for good. I remember being in our apartment in the dark, alone and feeling lost. Not the first or last time I would feel that way.

That relationship was my first important real experience. It was necessary though I knew, even then, that it was not right. But, the one that came after is the relationship which has defined my life and my world. It began for all the wrong reasons, as many perhaps do, especially for who I was.

He was tall and beautiful, and I literally ran into him in the hallway.  Or, should I say I ran into his stomach. Yep, he was that tall and I am that short. That day was the beginning of a turbulent and intense seventeen years. He was a lost soul and I was in need of saving someone, a habit I finally grew out of I am happy to say. A few years after we met, my kidneys decided to begin to take leave of their usefulness, and the doctor visits increased. Maybe because he met me when we were still young enough, and the fact that he was not a complicated person, made the increasing health issues seem routine and not a big deal. Perhaps I was just not as worried about my impact on someone as I am now, or perhaps it was just my life and such is life. Many times the increasing kidney infections, and the resulting fevers, had me curled up on the couch in the tiny apartment we lived in. My hours at the veterinary hospital were long and I often felt sick enough that I could barely stand, but was proud I rarely ever missed a day.  There were days when we moved to Colorado that my stomach was so bad frome the altitude that I remember crying because it was so bad and all I wanted to have some fun. But, it was all just part of our life.

Unfortunately, it didn't take too long for the little kidneys that could to decide they couldn't any longer.  Things got bad enough that my body was shutting down and there was not much time left. So, even though you had to force him to go to the doctor for himself because he was a big baby, he decided to get tested as a donor. Amazingly enough he came back as almost a perfect match, and against my better judgment on Mother's Day 1999 he saved my life.

It's difficult to explain what happens after someone saves your life and they are literally part of you. The bond that was already too tight turned into something even more unique and penetrating, although probably mostly on my end and without me really understanding.  It's difficult to explain how even the familiarity and security of even a disfunctional relationship can ease the occasional fear of not being  understood or wanted because of your health issues.  Having someone who may not really be there emotionally can sometimes be better than no one there at all.  But, for some of us that feeling only lasts so long.

Fast forward to 2011 and a little time to find my way after his death in 2010. Still numb and in shock from the last two years of trauma and drama, but seeing a little lighter clouds among the dark haze that had been enveloping my soul. A blur of stupid dating decisions based on feeling lost and completely alien in my own skin, and definitely in my own mind and heart. Then the slow process of finding myself gave way to the realization that I was okay. Okay with myself and who I am. Really ok. Once you finally get to that point, which many people never do, everything else falls into place. You know who you are, what you want and what you do not want. You finally accept that you are allowed to protect your heart and soul, and you allow yourself to be okay with wanting what you know you deserve. And finally one day you find your brain and heart work together and you never allow yourself to feel anything else again.
I will spare you all the other gory details of the horrible world of dating when you are me...

What do I want now? I want someone to really understand me, really accept me and really love me for all that I am. I want someone who wants to be with me for who I am, not how I make them feel about themselves. I want someone who's brain and heart work together as well, and someone who can really emotionally exist in this world.  I want a real partner and someone who I can have a real true and natural bond with. I marvel at the stories I read about people who meet when one is terminally or chronically ill and nothing stops them from being together because of that bond based on appreciation, support and trust. I know that is something I would not hesitate to do, but am fully aware that many would not.
​
But, the little eternal optimist inside keeps me trying... 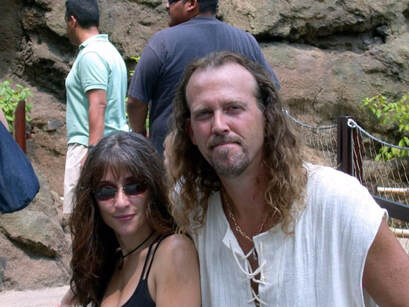